Every review I've read (should I be reading reviews?) of An Exaltation of Laarks compared them to Postal Service, so I was in no rush listen to the album. And then I got the album in the mail. And I listened to it. Thank the heavens, the album sounded nothing like that oft-made comparison. In fact, I'd say it has more in common with Gibbard's other project Death Cab, than The Postal Service. But Laarks differentiate themselves from any Gibbard project in the best way possible: They don't have Gibbard's whiny voice. Instead, they trade up for Ian Jacoby's sweet vocals and witty lyrics. The album is rocking where it needs to be rocking, mellow when it needs to be mellow, poppy when it needs to be poppy, and sweet when it needs to be sweet. It's a real gem that is probably hampered by it's oft made comparisons.

Catch them on their current tour, especially those of you in Phoenix, Laarks will be playing at The Trunk Space this Tuesday, the 2nd at 8pm. $8

Laarks - All the Words You Can't Say Right mp3

Posted by Jeffrey Benson at Sunday, February 28, 2010 No comments:

New Hold Steady - Heaven is Whenever

I know all the other even semi-hip music blogs have covered this, and better than I will, but I still think it's important to share. The Hold Steady have a new album due out May 4th called "Heaven is Whenever" In the press release, it is stated that "Piano and keys take a backseat to guitar on the new record" and we're left to wonder why, because it couldn't have anything to do with the departure of the fantastically-mustached piano man Franz Nicolay. There are no dates in Arizona in support of the album yet, but be assured they'll be here, and when they are, be prepared, this is not a band to be missed. Track list below, along with a live video of title track "Heaven is Whenever" (Which may have a different name now, as it's not on the track list).

Upcoming Show: We Were Promised Jetpacks

That's right all, everyone's favorite Scottish emo act will be in town tomorrow night. If you haven't seen them yet, these kids have a lot of energy and a real love for their craft. It'll definitely be a worthwhile use of your time.

Posted by Jeffrey Benson at Monday, February 22, 2010 No comments: 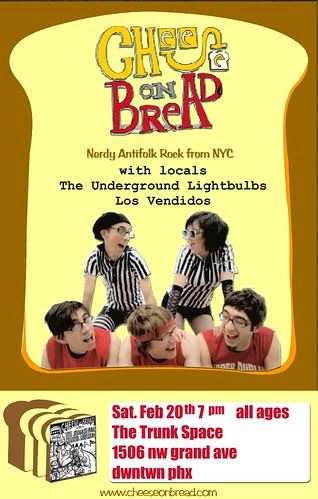 Dearest Cheese on Bread,
I am a terrible friend. I'd understand if you'd never want to talk to me again. I have neglected to write about your upcoming show until mere hours before it was set to start. Better late than never right? RIGHT?

Seriously though, readers this show will be nothing short of magical. I've been listening to Cheese on Bread's album "The Search for Colonel Mustard" solidly for about a month and it is way more fun than music this good should be. Cancel your plans and bring your date to the show, you wont be disappointed. All the info for the show is to the left. Check out the band's website and buy an album! Really! Totally worth it. Check out a song below. 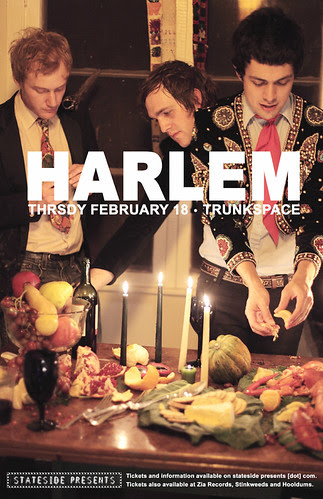 Don't miss the chance to see these guys in such an intimate venue. I guarantee this will be your last chance to see them in such a small place. This band is going to blow up. They're touring in support of their upcoming album "Hippies". The album is stellar. The band is an asset to the garage rock genre.
Thursday February 18th
Trunk Space
7:30PM
$8.00
1506 NW Grand Ave., Phoenix, AZ 85007
Check them out below!

Posted by Jeffrey Benson at Tuesday, February 16, 2010 No comments: